Pinhoti 100: The Molly and Holly Show 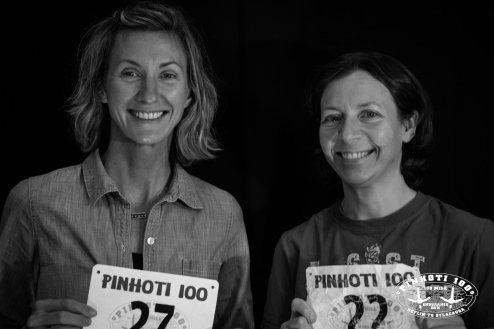 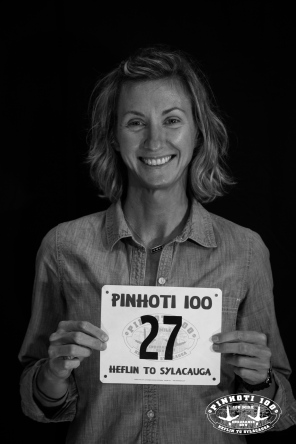 The thing about ultra races is that you never really know what you’re capable of until you start running your race. I knew I had a sub 24 hour finishing time in me – but the way I got there was not quite what I expected.

Atlanta FatAss – 6:47, 14th Gender Place (GP). I ran this off of 5 miles trail runs every other week. It wasn’t pretty by any means, but Molly stuck with me the entire time and I suffered through it.

And now Pinhoti 100. I’ve wanted to do this race since 2013 when I first registered for the 2014 event. My pregnancy derailed me! And my level of fitness derailed me in 2017 when I had once again registered for this sucker. I registered again this year – totally committed to starting this time. My initial plan was no crew and no pacer. Molly had offered to pace me and I said no way – just run it again this year with me! She kicked ass out there last year at Pinhoti 2017 aka “the hot year.” And do you know what that crazy girl did – she signed up to run it with me this year!! Lucky me! I made it clear from the beginning my goal was sub 24 – as in totally fine with 23:59:59. I often have “place goals” or dreams. But this was a race with sooooo many talented runners that I really didn’t even have a place goal – maybe somewhere in the top 20. I just cared about 23:59.

Here’s the thing about Molly. She is STRONG runner. And she makes me a stronger runner. I met her at Pine Mountain 40 in 2013. About 5 miles into the race, Harley and I started to talking to her and we ended up running the whole thing with her – at her pace – which is FAST and STEADY. I never could have run that fast that day (or gotten off course for 3 miles for that matter!) if it weren’t for her! And I don’t know if I could have done FA without her this year either. She’s fast, steady, loves to talk and makes some seriously yummy food! And drinks good beer 😉

A few people were dubious about us running together – but I never was. I talked her out of getting someone to pace us. We would essentially pace each other.  But I couldn’t talk her out of a crew. Her awesome husband, Richard, and super cool friend, Marie (who I’d never met) would end up crewing.

We drove to Alabama together. Packet pickup was fun as we got to see some ultra legends – Karl “100-miles-is-not-that-far” Meltzer and Jeff Browning. Then we gobbled up as much pizza as we could at Mellow Mushroom the night before and ran into some friends there. 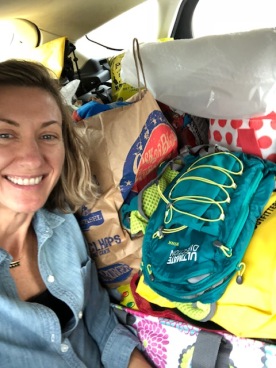 I don’t think we forgot to pack anything!

Race morning was COLD – as in 32 degrees on the way to the start and getting up to 40 at the actual start. I’d heard about the Pinhoti conga line at the start of the race so we agreed to move to front third of starters before race start. And that was smart – because the conga line was slowish. It was VERY difficult to pass several of the slower runners until at least 2-3 miles into the race – even up to the 2nd Aid Station (AS). 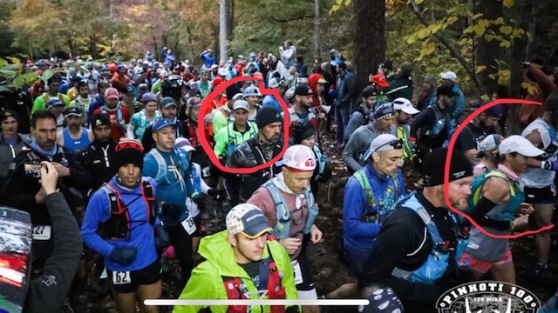 Race start. Holly and Molly and I spy Alex!

Just before Shoal Creek AS

Molly and I ran strong and happy all the way to mile 40 at Bald Rock. We met so many friendly runners and we both love to talktalktalk to other runners on the trail – but really no one more than Molly. Did I mention that she is like the friendliest person on the planet?! I’d heard how hard the climb up to Bald Rock was – and I guess because I thought it would be so hard – I was actually surprised with how “not hard” it was. Molly said we would feel like rockstars running on the boardwalk into the Bald Rock AS – and she was right. There are like 200 people there cheering on the runners. We spent a few minutes with crew there and kept on keeping on. 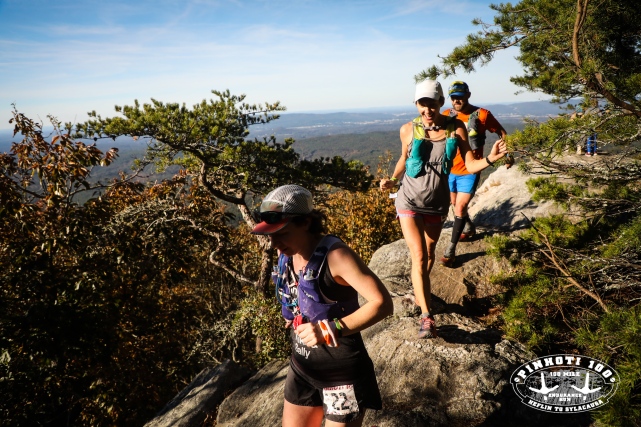 Almost to Bald Rock AS. I was doing my happy dance!

I was sucking on Tailwind and eating real food from all the AS and even at 40 miles – we both felt like we had just started running. I think having raced in 90+ degree weather all summer made a day with highs in the 60s feel super easy.

We ran into Adams Gap 55 mile AS at a time of 12:30 – behind “schedule” for a 24 hour pace. Neither of us were running with GPS – just simple watches – mine a $7 moving hand watch from Walmart. Our plan was just to run whatever pace felt right at the time. After Porter’s Gap mile 68 we hauled major ass to Pinnacle AS. This is another climb people made me so afraid of – it was supposed to be several switchbacks up the “almost” top of a mountain. Again, I was underwhelmed, probably because it was so much scarier in my dreams. We ran parts of it and major power-hiked the rest.

One of the awesome things about this race is the AS. They are amazing. Several of the volunteers return year after year to the same AS and have a lot of pride in their presentation. The vibe, food selection and even décor is very personal. Lots of string lights, loud music and amazing food – some of which is made to order. One has a full bar (and no, I didn’t 😊). We rolled into one to the Imagine Dragons’ “Believer and I felt like a champion! I have no idea what the lyrics are (that goes for about every song ever recorded) but it’s beat is great for running! Sidebar – can someone make me playlist that will make me feel like a badass while running – and then show my technically challenged self how to play it?!

Anyhow, Pinnacle AS was awesome, but not awesome enough to keep our attention for more than a minute. We ran out of there still feeling awesome and then we reached Bull’s Gap at mile 85. Bull’s Gap was kind of fun in that NOONE expected Molly and I to be in 3rd place at that point. And neither did we. We assumed we were toward the back of top 10 until we were informed otherwise. At this point it was truly unknown – but kind of doubtful – that we would make 24 hours. But as we left that AS, I told Molly that we were about to make history! And she asked, legitimately so, how exactly are we making history. Now I was being hyperbolic to be fun but then I answered right on: we are making our own history/herstory!!

When we got to Watershed AS at mile 94 I was bummed. Really bummed. We readjusted our goal to make 24:30. Our plan now was just to make sure we maintained our place. And we gave it our best effort. We ran when it hurt and hiked as fast as we could when we couldn’t run.

Once we hit the pavement on the way to the Sylacauga HS stadium we a saw a sign that it was 2 miles to the finish. I looked at my watch and we had 23 minutes to make 24 hours. I took off at a pace my body is very unfamiliar with and yelled “This is going to hurt but dammit we are going to make it!!!!” It turns out it was prolly closer to 2.5 miles so it’s a good thing we were busting out what must’ve been 8 minute miles. I think I’ve run an 8 minute mile for one mile once in my life! And now I ran 2+ fast miles at the end of a 100.59 miles race!!! We reached the stadium smiling and in a state of disbelief as we saw the clock 23:58+. Our finish was the stuff of dreams. Two friends crossing the finish line together after 100+ miles. We tied for 3rd place in 23:59!!! How crazy is that. Our goal was 23:59 and we nailed it at 23:59! 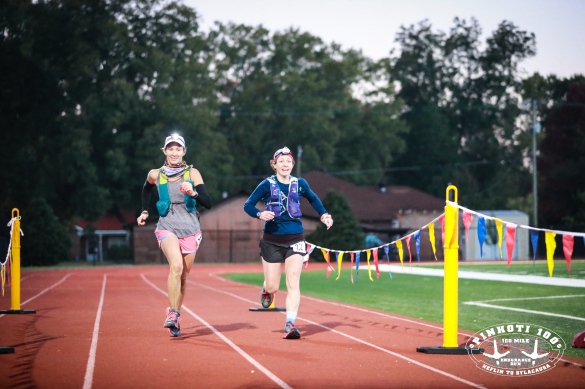 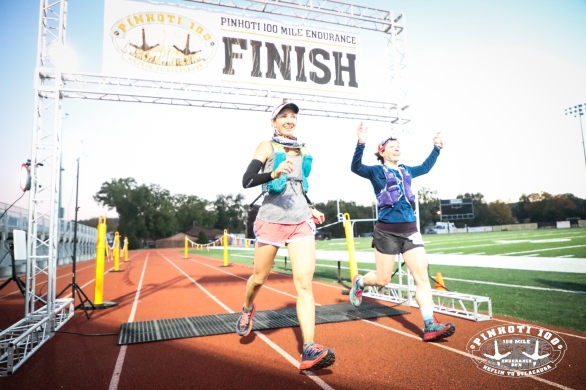 The beauty of running together the entire way is that we were tethered to each other. We took turns being the “line leader” (thanks Winnie) – and whoever felt best pushed the other at any given point.

And a word about our crew. Marie and Richard were amazing. Marie had a chart printed out and took notes of what was needed at the next AS – she took this role on like it was her job. It was an amazing thing to witness.  She could prepare, fix and anticipate just about anything. I’ve never done anything that required a crew so I didn’t really know what to expect and planned to mainly use my drop bags. But it was sooo awesome to have someone that was pretty much guaranteed to be there cheering for you and looking out for you. Many, many thanks to Marie, Richard and Keith (who by virtue of being married to Marie was usually there being hilarious – and calling us ballers 😊). 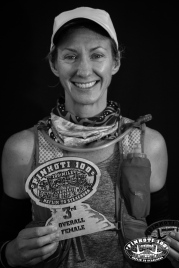 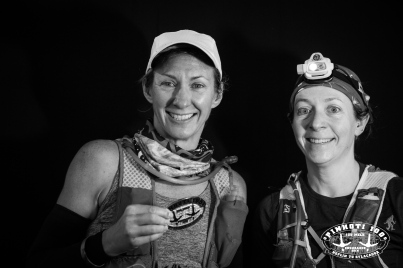 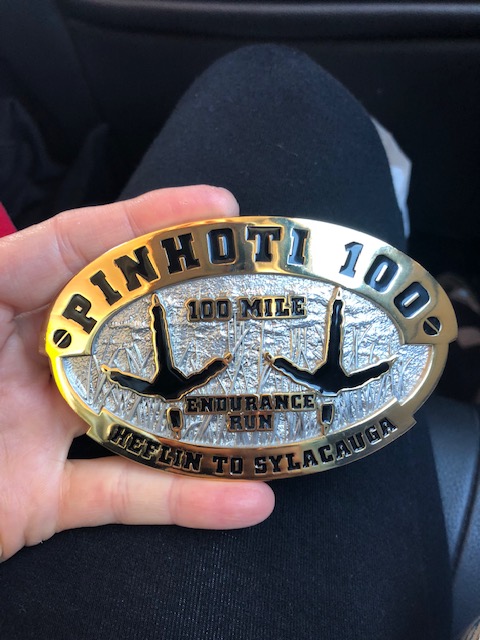 We stayed at the finish for 6 hours to watch all the runners come in. It was soooo fun! I loved seeing Alex Young, a running friend from Atlanta, cross the finish line and watching one of the sweetest families ever there to cheer him on. His sister and two precious nieces made him several fun signs. We were lucky enough to run with him for several miles. Another local running friend, Evan Dare, crushed the hell out of that course and came in 2nd OA.

Fun facts:  No one passed us after mile 54. We pretty much had an even split. 12:30 for first 55 miles and almost 11:30 for last 45. We probably peed 50 times…each. I only fell once and have zero blisters. There is no more Halloween candy left in our house. And Molly and I are still friends 😉 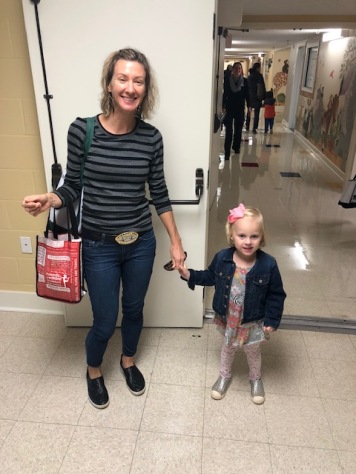 No rest for the weary! You still have to be a mom the day after a 100 – but the buckle helps!