My last post was February 7, 2014.  Since then I’ve had two adorable kids. No amount of endurance running could’ve prepared me for biggest endurance event of them all: parenting. Sure I’ve wanted to DNF a couple of times; usually after a night of no sleep, or six months of incurable diaper rash, or a tantrum that a two-year-old kept trying to perfect day after day, or after picking a turd up off the floor for the third time in a day. But I’m going for the buckle – the one that reads “Mom of the Century!”

Since these kids are all time consuming, my running tempo has slacked off a bit. Like a BIG bit. I ran the Sweetwater Half Marathon last February and felt pretty strong at the time despite little training leading up to it. You’ll see that’s a trend of mine. Trying to eke out a trail run on little training. I just don’t have time for it. I’d rather just suffer for six-ish hours on race day and then for about 50 hours the following week. Then I decided to run the Atlanta FatAss 50k this January. I seriously managed this one on 4-6 mile training weeks. My hammies thought they were going to explode but my dear friend Molly ran with me the whole time – which was VERY slow for her! If not for her – I don’t think I would’ve made the six loops in freezing weather at Sweetwater SP. The thing of it is though, 32 miles sounds totally nutballs and undoable. But I knew I had done that and over three times that before – so I knew it was physically possible. And that’s when I was like – fuck it – let’s just do it.

And because I did FatAss, I decided to sign up for Cloudland Canyon 50k – which I, by the grace of god and a bit of tenacity on my part, finished this past weekend. So here’s how I’m going to structure this race blog – by listing the things that got me to the finish – in no particular order.

Here’s another take away. This state park is crazy beautiful! How the hell have I lived in GA for 22 years – a mere two hours away – and never visited this place!? Anyone who is reading this in GA/TN/AL owes themselves a trip to Cloudland Canyon. RunBum Sean Blanton did a helluva job showing off the pearls of this SP like Cherokee and Hemlock waterfalls, Sitton Gulch Creek and the 500 stairs that you get you there.  The first part of the course also had fun technical single-track – with lots of rocks and roots. Sean also had a fun crew of volunteers, including the locally famous Jarian aka Mr. Inspiration who gives free hugs, high fives and glitter love. This was my first RunBum race although I did volunteer at his inaurgural Georgia Death Race. Even back then, I was so impressed with his race orchestration – truly no detail is overlooked. In summary, sign up for a RunBum race, be happy spending time outdoors surrounded by natural beauty and don’t be a pussy and DNF. 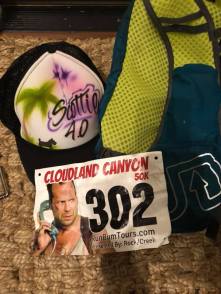 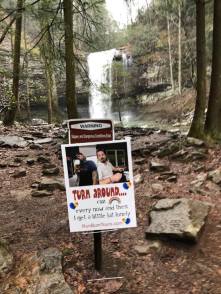 4 thoughts on “Cloudland Canyon 50k – Don’t call it a comeback!”