The buzz Race bib #1. I was popular at every check in, and glad to win the alphabet.

This was about 10 seconds before the start.

My first DNF A day later, I have no regrets…I don’t think I had a choice, and the soft-tissue swelling today confirms it was more than a cramp. After battling with my cranky calf for 25 miles, even walking slow was becoming difficult. My pace dropped rapidly in the last few miles before the 82-mile aid station, so a crawl to the finish would have pushed the time limit anyway. Like everybody else running with wet feet for 20+ hours, my feet were on fire, and glad to go along with the drop. 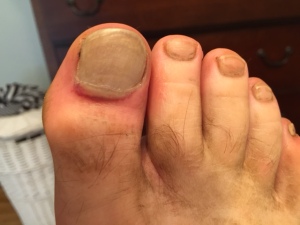 This big piggy is going to market.