Harley checking in here… Last Saturday (4/12) I set my alarm early enough to figure out what time to really wake up and headed to nearby Sweetwater Creek State Park for my first second-time 50k. Holly accomplished that when she ran her 2nd Pine Mountain 40 last November, so now we have both graduated from newbies to experienced, I guess.

Sun rising. Pre-race banter. Long lines at bathroom stall. Nipples taped. Warren stopped by and said he was sore from over-training. What’s that? One of the local legends, Richard S, is in the middle of a back-to-back-to-back schedule of long weekend runs, so he said his strategy was to take it easy at the start. I always listen to him, and so didn’t mind the early traffic jams on the single track.

A slow first 1-2 miles really helped me get in the groove. Usually I burn myself out trying to keep up with Holly. The pattern is a good 20 mile run before bonking while she keeps going. Since she was not running (coming off the night shift), I tried to be steady, not fast. I also really benefited by giving myself an extra 20 yards after peaking on the steep climbs to aid full cardio recovery. 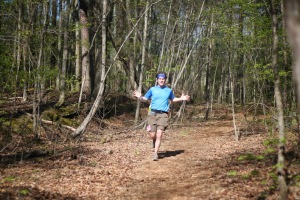 Water crossing and wet shoes. The river crossings were great relief. Embrace the water, at least on a warm day. Why were people changing into dry shoes when there’s more water in another mile or two? Murphy’ Law is in effect anyway—if you think you want to keep your shoes wet to cool you off, they seem to dry out faster. 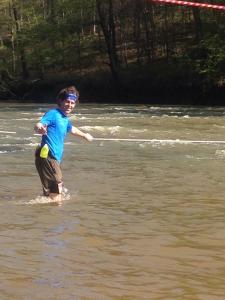 Aid station volunteers are pretty cool. Our time together was short, but sweet. Jason, I almost came back for a second popsicle, if not for the brain freeze. Other than grilled cheese sandwiches on longer runs, the popsicle might be my favorite aid station food. The worst was a few months ago when I thought I was hitting some ginger ale and got warm Miller Lite.

Sweat shirt, literally. 80 degrees is hot when you’re not used to it after a nice winter running season. My shirt was stiff with sweat, with textured salt crystals forming around my shoulders. It was a visceral lesson in how much salt I lost, and therefore needed to ingest during the event. I’ve never taken in too many electrolytes in a run. So I paid the price by the end… I really need to learn. At least I was a lot better than a few weeks previous at the Oak Mountain 50k in Birmingham, AL, when an awesome run turned into system shock—after a winter of barely sweating, the warm spring runs seem like an inferno. 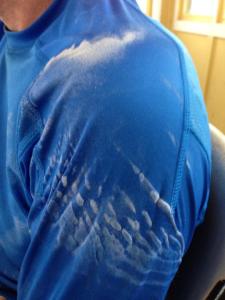 Joel and Brooke and I ran a similar pace for a big chunk of the day. I was able to feed off their steady persistence, and never needed to know what mile we were at. Just keep running and enjoy the trial/trail. Joel has some hardware on his belt (multiple 100M races) and is fun to follow because he is so steady. And then Brooke is tenacious. She kicked butt in a 12-hour event (~69 miles, I think) several weeks ago. She kept bouncing back when it seemed like the heat was melting us. She also deliberately ran through all the streams…trying to cool off. Wanting to finish strong, I was bummed to start cramping with 3 miles to go. Joel had no sympathy when he passed me and prodded me to not walk if I wasn’t hurt, so I shuffled in behind them. It was a good karma day since we’ll all be at Thunder Rock 100 in a month. 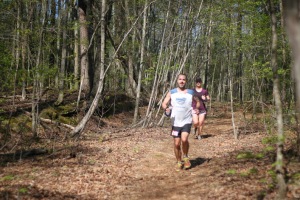 It’s a pretty great feeling to hear the small crowd shouting encouragement for the last 50 yards up the stairs into the finish chute. Three more steps and into my chair and the traditional post-race icy brew. Sally (women’s winner) had already changed clothes and was well into relaxation. Holly snuck in a 7-mile loop and hung out at the finish line cheering everybody on…and wanting more. She’s been putting in more weekly miles than me, so it was hard for her not to do this one. 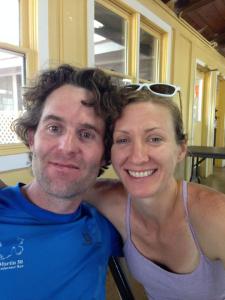 And after all that, I did another ultra the next day…doing yard work. It’s more fun to trail run. 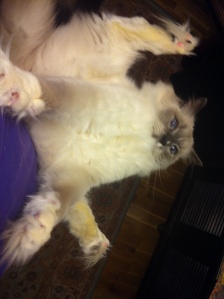