Holy mackerel! The Cruel Jewel lived up to its name…it was a cruel bastard of a course! Harley and I signed up for the Cruel Jewel 50 (really 55-58 miles) kind of on a whim. It was taking place on a weekend that we didn’t have anything else planned and it would be in north Georgia mountains which we love, but we just don’t get a chance to run up there very often. It also had a unique start time of 4pm which would add some unfamiliar elements like night running and staying up all night. The other thing this race had was ELEVATION…gain and loss. It was supposed to be 15,000 ft of gain AND 15,000 of loss but ended up being closer to 19,000. And this did NOT go unnoticed by our legs. In any case – this is how I decided to recap this precious little race. Enjoy…..

It started at Camp Morganton in Blue Ridge, GA and ended at Vogel State Park, 11 miles south of Blairsville. Of course, those running the hundred would turn around at Vogel at an aid station appropriately called “Poor Decisions AS” and make their way back to Camp Morganton.

The race route followed Aska Rd. out of Camp Morganton to the Aska l mountain biking trails until we reached the Benton Mackaye Trail (BMT). We remained on the BMT for ±15 miles and it then it happened. We knew it was gonna happen. We’ve heard about it. We just didn’t believe it could be THAT bad. But it was. It was worse.

It was the Duncan Ridge Trail (DRT). It gets its own section below. From there we hit some familiar ground on the Coosa Backcountry Trail and took it clockwise back to Vogel to the Poor Decisions aid station at Cabin #7 (which was approximately a 50 yard walk to our cabin #15 that came equipped with the most awesome shower ever).

The Preamble – We rolled into Camp Morganton around 1:45pm, just in time to see the 100 milers off as they were starting at 2pm. I was excited to see my friend Katie head out on what would be her first 100.

After they took off, the 15 of us who would be doing the 50/58 hung out and talked for the next two hours in between what must have been seven pee breaks. This was a highlight of the race for me – just chilling with good peeps like Jason, Corinne, Warren, Kristen, David, Kelly, and Sean just to name a few – oh, and Harley! We discussed what animals we’d likely see on the trail. I’d been nervous about bears but now these people had me fretting an encounter with wild boars and snakes. And hearing coyotes howl in the middle of the night. Yiggity yikes! I felt as skiddish as Scooby and Shaggy!

Jason has about 550 pairs of these white SVEDKA sunglasses with gold shades. Everyone BUT Corinne joined in on the fun of taking the group picture before we all went…into the wild.

Daytime running – The race started at 4pm on a very muggy and hot day, the likes of which these two trail runners had become unaccustomed to. I was doing okay until we hit Davenport Mountain. This was the only out-and-back section of the race. So when we went about 2.5 miles down the mountain, my legs were well aware they’d be having to go right back up it. This was around mile 14ish. And this was when I reviewed the current CPR guidelines with Harley as I thought my heart was going to come right out of my chest. “Forget about the mouth-to-mouth! Just focus on chest compressions. They’ve got to be real strong and fast!” 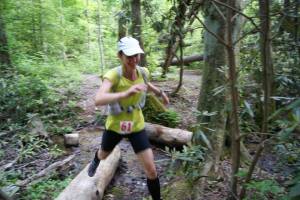 By the time we made it back up that beast my legs and spirit were shot and I dare say that I never fully recovered from that for the rest of the race. It was so humid that I finally experienced running and nausea. It wasn’t too too bad, but it prevented me from drinking and eating properly which contributed to me wanting to just throw in the towel at mile 23. Harley and I hooked up with our new friend Warren around mile 20 and stayed with him until the last seven or so miles of the race. Night officially fell around mile 22 and all of our headlamps were on.

Nighttime running – So nighttime running might not be so bad if it weren’t accompanied by rain, wind, fog and cold temps for a whopping 9 hours. But it was. And Harley, Warren and I were committed to hiking by mile 23, albeit fast hiking. So we endured the elements for a longer period of time than those who were running. A lot longer. The Adams were also committed to appreciating this experience for what it was – an adventure race and not a real running event.

It started raining around 10pm(?) and continued to rain until 7 or 8am. The rain made a lot of the rocky trail slick and treacherous. The fog made it even worse. Our flashlights were almost meaningless with all the fog. Good thing we weren’t running. And good thing we didn’t happen upon a bear or boar. Though at one point I could have sworn I smelled a bear. But Harley assured me it was him that I smelled.

The Aid Stations – Were awesome. I mean, god bless these volunteers. We saw Laura at Deep Gap at mile 9 who was sweet enough to comment on how “fresh” we looked. If she’d only seen how we downward-spiraled after that. Ben and Hunter manned the Shallowford AS/mile 23 which was home to the first ever AS popsicles and a super yummy homemade caprese sandwich. This was when I decided to make a commitment to be a hiker and not a runner. And that decision allowed me to eat to my heart’s content. I’d only get nauseous and feel like crap if I ate and ran, right? So I ate. And walked. Next up was Wilscot AS/mile 30 where our drop bags were. Too bad I wasn’t freezing yet. I had a long sleeve shirt in mine that would have been awesome 10 minutes after we left! In any case, Phil and Anne hooked me up with some yummy Ramen noodle soup. Brad and I didn’t want to leave. But the theme of the race was – these volunteers are nice – but they are not hospitable – they want you outta their AS in under 5 minutes. See, I tried to quit here too – whining about how I was done and I didn’t care anymore – but nope – they kicked me out back to the trail. I had to finish what I started. So onward to Skeenah Gap AS/mile 35 where we found Jim and Matthew. Ah yes, a sight for sore eyes that Jim is. They hooked us up with some yummy grilled cheese and I cracked the secret to Matthew’s grilled cheese sammy – garlic powder. Nice try but you can’t fool this refined palette. Later, another local running celeb, Mitch, would be making a PB&J for us over a fire at White Oak/mile 48. All of you, thanks for your words of encouragement, your time, your yummy food, and your utter lack of hospitality. I may not have finished without any one of those things!

The Duncan Ridge Trail – Let me start off by saying, I hate the DRT. Hate, hate, hate. And this isn’t the cutesy hate where I say I hate it but really mean I like it. I hate it. What I knew about the DRT going into the race is that it’s called the “Dragon’s Spine” because you go up and down ridgelines and it has a merciless lack of switchbacks up these steep mountains. At one point I was walking sideways up the mountain to give my legs a break. So some might say the DRT is “rugged.” The Adams just think it’s a shitty trail. Granted, we were trying to follow it in the dark and in a kinda thick fog, but I’m pretty sure it will still look like a deer trail during the day. I’m just so grateful that Willy did such a kickass job marking the course with all the white ribbons.

I also blame the DRT for me losing my first toenail, because no matter how hard it was going up the mountains, going down was not much better. My toes were being jammed up against my shoe’s toebox again and again. It had to fall off. Just to rebel. My quads were so thrashed. It would hurt if I just touched them. And that is why Harley and I agree that if the DRT is ever mentioned in our presence, we will politely excuse ourselves from the conversation. However, I would like to find a way to dress up as the DRT for Halloween, as nothing would be scarier than that!

Vogel State Park – Once we were on Coosa, we were stunned to see people returning from Vogel. I mean, what were the 100 milers thinking!!! There is no way I could have turned around there and gone back the way we came. HEEEELLLLLL NO!!!! We tipped our hats to them and struggled on. When we saw Dustin on the trail with his GoPro camera, we knew we only had 2.5 miles to go. My tail was back up and maybe even wagging a bit. I could NOT believe we were almost done. Remember our goal was to finish about 6 hours before we actually did. That’s what you call going 2.5 miles an hour!!! We chatted with Dustin the rest of the way in until we saw the likes of Jason Rogers at the finish and Liza waiting to take our picture.

After we noshed on some awesome cookies and more Ramen, we headed to our cabin. I called my mom to assure her I was alive. I mean, I told her I would be done by 6am – and it was actually closer to 11:30am!!! Harley and I took 30 minute showers and took a 2 hour nap. We woke and hit a local pizza buffet, Cici’s style. We grabbed some chips and salsa for the road as well. We made a nice fire along the creek back at the cabin – drank to numb the pain and then slept for 10+ hours. It was dreamy. On our way back to the other car back at Camp Morganton the following day we passed two 100 milers finishing their race. Insane!!! How are they still on their feet after over 43 hours! Talk about determination.